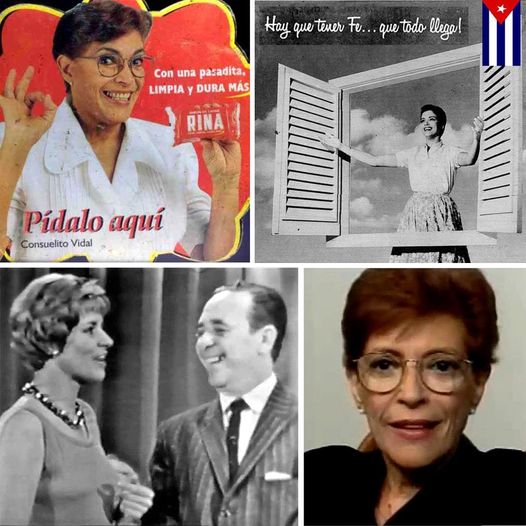 RECORDANDO A CONSUELITO VIDAL. El 4 de diciembre de 1930 llega a este mundo esta cubana criolla, divertida, profesional y una gran actriz dramática cuando había que serlo.
Conocida como la Diva de la animación cubana. Se dedicó mayormente al trabajo en diversas modalidades dentro de la radio y la televisión cubanas. Durante más de 50 años de carrera artística realizó memorables actuaciones en dramatizados, como la antológica Yerma, filme para la televisión que Amaury Pérez García dirigió en el año 1964, y que la actriz protagonizó, junto a Sergio Corrieri y Erdwin Fernández. Esta versión del original de Federico García Lorca fue trasmitida en el mismo año de su realización en el espacio… More
On December 4, 1930, this Cuban Creole, funny, professional and a great dramatic actress comes into this world when it was supposed to be.
Known as the Diva of Cuban animation. He dedicated himself mostly to work in various modalities within Cuban radio and television. For over 50 years of artistic career she performed memorable performances in dramatized events, such as the anthology Yerma, film for television that Amaury Pérez Garcia directed in 1964, and which the actress starred, alongside Sergio Corrieri and Erdwin Fern ánndez … This version of the original of Federico Garc íaa Lorca was transmitted in the same year of its making in the space ICR Theatre, and today is regarded by specialists as a museum artistic work, among many reasons for the remarkable performance of the then-young actress Consolation Vidal. Also in Teatro ICR and in most cases directed by Roberto Garriga performed in Electra (by Eugente O ‘ Neill), Intimacy of a Star (title that was used for both cinematic and television versions of the theatrical text The Grand Knife, of Clifford Odets) and A streetcar called wish (from Tennessee Williams), among others. After, already enshrined as a great actress, she left an indelible memory in Cuban teleaudiencia with other performances, such as the case of the serial Julito the fisherman (Serie). The beauty of her face and voice opened doors for her from a young age on radio and television. In 1950 he was already participating in the popular daily radio La Tremendous Corte. Their participation in telenovelas of the 50 s and 60 s are happily remembered, as their Ni ñaa Lala, in Tierra Brava de Dora Alonso (also radiated) and the same author Between Mount and Sky. His acting teachers were Agust ínn Campos, Luis Manuel Mart ínez Casado, and Enriqueta Sierra, as well as in animation was the great Germ ánn Pinelli. They are also within his earliest histrionic works, his protagonists in The Smoke of Memorial, a kind of television story where among many other characters he played Madame Curie. In the 50 s, he began making outstanding and regular appearances on the small screen: modern home, alongside Armando Soler, a space in which the popular Cholito of this outstanding actor is born. It’s right here that she meets then cameraman Amaury Pérez Garcia-then one of the brightest TV directors-who soon becomes her husband and father to four children. From 1958 Consuelo Vidal multiplies her success as a driver of a weekly humorous on small screens, when she had the opportunity to replace Mim í Cal in behind the facade, in which she had already been doing her frequent and in this case initial young lady. This humorous consecrated her and maintained her for many years to the highest level of popularity within Cubans, thanks to her remarkable work as an actress-driver in the much liked weekly space. Consuelito, as the Cuban people familiarly baptized her, also acted with unquestionable success and professional rigor in children’s programs, such as Amigo and his friends, created and directed in 1962 by Erdwin Fern ánndez, or Aunt Tata tells tales, both radiated and televised; in them he put voice to various characters and sang the main songs intended for children. Also in this demonstration it is worth highlighting that his voice was used in numerous characters from cinematic animated, such as the popular ′′ Matojo «. Consuelo Vidal also performed bold special performances in television musicals (remember Farah Maria’s unforgettable substitution as part of the vocal quartet Los Meme, in one of the weekly musicals on television of the late 60 s) as well as tested its Successful interpretative qualities in some of the great cabaret shows of Havana and Varadero of the same time, that was the case of Consuelito in the Circus written especially for her by Carballido Rey and directed by Joaqu nn Riviera, which at the time was considered The greatest attraction of night Havana. In 1965 Consuelo ventured for the first time in the movies as an actress, a medium in which she received important awards in festivals and specialist publications, in addition to the applause given by the public, including that of other latitudes, which could not resist charisma, beauty and the craft of this actress who cultivated and maintained the sense of ′′ Cubania ′′ during her long and virtuous professional artistic career. His raid into theatre, as far as the tables are concerned, does not represent a significant job, until 1986 when with much success of public and criticism is presented directed by Nelson Dorr in The Other Around the World, in The Habanero Theatre Karl Marx. Consuelito’s public appearances in the 90 s were becoming less frequent as a result of health problems-persistent deficiencies in his bone system-without having stopped working sporadically in cinema, or summer television. Then in the summer of 2003 he suffered at home, amidst recordings (show performances) for the T. V, acute cardiovascular disorders that are no longer answered again. He died in Havana on October 7, 2004 from cerebrovascular disease. Just as it was in life, Consuelo Vidal will be remembered as a first-place figure within Cuban national culture. ·