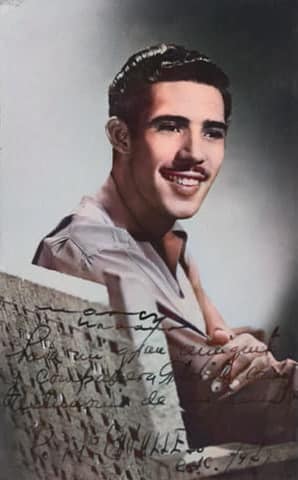 REINALDO MIRAVALLES EN EL RECUERDO. Este carismático actor que cubría una trayectoria desde el drama a la comedia, nos deleitó muchas veces con sus brillantes actuaciones, unas de villano perfectamente odiable, otras con sus simpáticos y ocurrentes guajiros, nos dio siempre una clase magistral de grandeza y sencillez. Nació en La Habana en enero de 1923.La primera manifestación artística por la que se inclinó fue la pintura, por lo que se matriculó, cuando tenía 17 años, en la escuela anexa de San Alejandro en su curso nocturno. La difícil situación económica que atravesaba le impidió seguir estudiando, hasta que en 1944 hizo su primera actuación en la radioemisora La voz de los Ómnibus… More
This charismatic actor who covered a trajectory from drama to comedy, often delighted us with his brilliant performances, some perfectly hateful villain, others with his sympathetic and occurring guajiros, always gave us a masterclass of greatness and simplicity. He was born in Havana in January 1923. The first artistic demonstration he leaned toward was painting, so he enrolled, when he was 17, at the accompanying school of San Alejandro on his night course. The difficult economic situation he went through prevented him from continuing to study, until in 1944 he made his first performance on the radio station The voice of the Allied Omnibus. From that date, he worked on almost every radio station in Havana. Reinaldo Agust ínn Miravalles de la Luz, was a prominent Cuban actor. He stood out on radio, television and particularly in national cinema. His performances in the films The Twelve Chairs, The Man of Maisinicu, The Birds throwing at the shotgun and many others are relevant. He was resident in Miami since the mid-90 s ‘ without losing his bond with Cuba, where he starred in his last film Esther somewhere, under the direction of Gerardo Chijona. Notable is their participation in Cuban television’s most famous humorous series of all time, The Tremendous Court. In 1951 he began working as an actor on Cuban Television, a media he never completely abandoned and that year received the award from the most prominent actor. In his long television career he played hundreds of characters, including the one of Guajiro Melesio, with whom he reached a very high popularity. His interpretative quality allowed him to embody both comical and dramatic characters. In theatre he also performed in a multitude of works, although it was certainly in a Cuban classic, Santa Camila de Havana Vieja, where he achieved his greatest success. A very long list of movies that are between the 26 made.
He died on October 31, 2016 in Havana, Cuba, aged 93, a victim of complications due to various suffering.
Finally we will leave some reflections from the remembered artist. «… Always my main goal was to please, convince, but most of all respect the public. If you offer me a movie that is not right… not here or there. I don’t do it quietly. Here, I don’t want to specify, I’ve been offered movies. But the movies that don’t concern me, I don’t make, because I think it’s losing prestige gained to the people and defraud, never…» ·