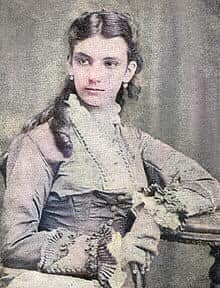 LA VERDADERA HISTORIA DE LA NIÑA DE GUATEMALA La Niña de Guatemala fue María García Granados y Saborío quien era una dama de la alta sociedad, hija del general Miguel García Granados, cuya residencia era utilizada para realizar tertulias de artistas y literatos destacados. En el año 1877 el poeta cubano José Martí llegó a Guatemala y su asistencia a las tertulias en la residencia del general dieron como resultado que se enamorara de María. José Martí solía manifestar una visión crítica con respecto a la inferiorización de que era objeto la mujer, por lo que centró su atención en las damas guatemaltecas y las describía de “andar indolente, de miradas castas, vestidas como las mujeres del… More
La Ni ñaa de Guatemala was Maria Garcia Granados y Sabor íoo, who was a lady of the high society, daughter of General Miguel Garc íaa Granados, whose residence was used to make tertulias of outstanding artists and literatos. In 1877, the Cuban poet José Mart í arrived in Guatemala and his attendance at the General’s residence resulted in him falling in love with Maria. Jose Mart í used to manifest a critical view regarding the inferiorization of women, so he focused on Guatemalan ladies and described them as ′′ walking indolent, caste-looking, dressed as women of the people, with the braids lying on the mantle…», that’s why when he met Maria, a woman with similar characteristics albeit with a more cosmopolitan air, fell in love immediately. 24-year-old Jose Mart í and Maria Garcia Granados of 17, agreed on what they felt each other, however love could never be matched due to José Mart í’s marriage commitment to another woman. Finally, on May 10, 1878, Maria Garc íaa Granados and Sabor íoo passed away, which gave rise to the belief that she had died of love by not enduring the pain that caused her to marry her beloved, then Jose Mart í He embodied his sadness in the poem IX of his Single Verses, aka La Ni ñaa de Guatemala. Jose Mart í left something in the poem IX more than a death by sadness, allegorically suggests suicide of the girl along the lines ′′ She entered the river late, the doctor pulled her dead, they say she died of cold, I know that died of love.»
When José Mart í returned married to Guatemala, Maria wrote him the following note: ′′ It’s been six days since you arrived in Guatemala, and you haven’t come to see me. I have no resentment with you, because you always spoke to me honestly about your moral marriage commitment situation. I beg you to come soon «… But he never came back. In 2013, on the occasion of celebrating the 160th anniversary of the birth of José Mart í, the Cuban Embassy in Guatemala located the tomb of Maria Garc íaa Granados in the General Cemetery and a memorial plaque was revealed in a protocol to the girl of Guatemala. The tomb of Maria Garc íaa Granados was one of the most visited, especially by girls who asked for your help in loving situations, there is also the legend that near this grave appears a lady with sad countenance who asks to be adorned with flowers to the Girl from Guatemala. GUATEMALA’S GIRL I want, in the shadow of a wing,
tell this story in blossom:
the girl from Guatemala,
the one who died of love. The bouquets were of lilies;
and the reseda orlas
and jasmine; we buried it
in a silk box… She gave the crumbling
a smelly pad;
he came back, came back married;
she died of love. They were loading it on the road
bishops and ambassadors;
behind the town in bands,
all loaded with flowers… She, for seeing him again,
went out to see the gazebo;
he came back to his wife,
she died of love. Like hot bronze,
to kiss goodbye,
it was his forehead – the forehead
that I have loved most in my life!… He entered the river late,
the doctor took her out dead;
They say he died of cold,
I know he died of love. There in the frozen vault,
They put it in two banks:
I kissed his sharp hand,
i kissed her white shoes. Quiet, in the dark,
the undertaker called me;
I have never seen again
to which died of love. Jose Mart í ·