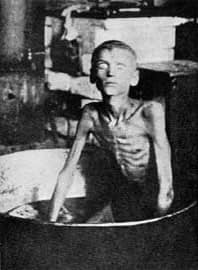 El hambre como arma política Una víctima del genocidio ordenado por Stalin Entre los numerosos crímenes cometidos por Stalin se cuenta el de la hambruna forzosa de Ucrania durante los años 1932-1933. Como es común en los países en los que reina el socialismo, las hambrunas intencionadas se han usado como arma política utilizada para alcanzar los deseados objetivos contra varias clases. Las víctimas señaladas en esta ocasión fueron los kulaks, los agricultores campesinos que tenían propiedad y contrataban a trabajadores.
Cuando Stalin alcanzó el poder en 1924, vio el nacionalismo ucraniano como una amenaza al poder soviético, creyendo que cualquier insurrección futura podría provenir… More
A victim of the genocide ordered by Stalin Among the numerous crimes committed by Stalin is the forced famine of Ukraine during the 1932-1933. s. As is common in countries where socialism reigns, intentional famines have been used as a weapon policy used to achieve desired goals against various classes. The victims reported on this occasion were the kulaks, the peasant farmers who owned and hired workers.
When Stalin reached power in 1924, he saw Ukrainian nationalism as a threat to Soviet power, believing that any future insurrection could likely come from the kulaks. So decided to crush them using the methods that had been so successful in the USSR during the ′′ class settlement ′′ policy. In 1929, he arrested thousands of Ukrainian intellectuals under false charges and either sent them to labor camps in Siberia. It carried out collectivization of Ukrainian farms by seizing all private lands and livestock, which affected about 80 % of Ukraine’s population, formerly known as Europe’s barn. He declared the kulaks enemies of the people. Ten million people have been estimated to be dispossessed of their homes and belongings and sent to Siberia on unheated freight trains, conditions under which at least one-third of them perished. Those who stayed in Ukraine had a hard time, if not worse. Facing war propaganda and a hard battle, many Kulaks rebelled, returning to their properties, and even killing local Soviet authorities.
As soon as the word rebellion came to Stalin, the Kulaks small success became brief. Red Army soldiers were sent to drown the rebellion and secret police launched a campaign of terror aimed at breaking the kulaks mood. In 1932, with most Ukrainian farms forcibly collectivised, Stalin ordered an increase in food production quotas. He did it on multiple occasions until there was no food left for Ukrainians. The 1933 wheat harvest was sold on the world market at prices below the market. Historians have calculated that such a harvest could have fed Ukrainians for two years. When the Ukrainian communist party asked Stalin for a reduction in quotas, he responded by sending the Red Army to exterminate the Ukrainian PC and prevent citizens from going further with the creation of an immense concentration camp within its borders. The secret police terrorized the population by randomizing inspections of personal belongings and seizuring all food they found, now considered sacred state property. Any state food thief was either immediately executed or sent to the Gulag for at least ten years.
The effect was famine, massive and prolonged. Millions of people died, simply because they didn’t have anything to eat. The characteristic appearance of children was skeletal and with a swollen abdomen. It is said that mothers abandoned their children in train wagons going to big cities in hopes that someone could better care for them. Unfortunately, cities were flooded with misery and hunger. Ukrainians went on to eat leaves, dogs, cats, rats, birds and frogs. When this wasn’t enough, they even went to cannibalism. It has been written that ′′ Cannibalism was so common, that the government printed signs saying: eating your own children is an act of barbarism «[1]
Kulaks don’t have a museum, much less a memorial. Today, we remember them. [1] Book black of Communism. Stephane Courtois Source https://www.liberalismo.org/articulo/225/7/hambre/arma/politica/?fbclid=IwAR10mU9Jcqj0Tj16iC7zINUi-pO9I1o7rvpFVQJDyl5iAHdtt0wtbl0uhU8 · 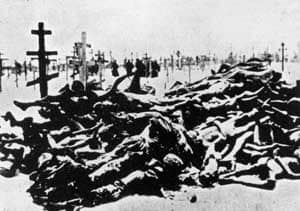