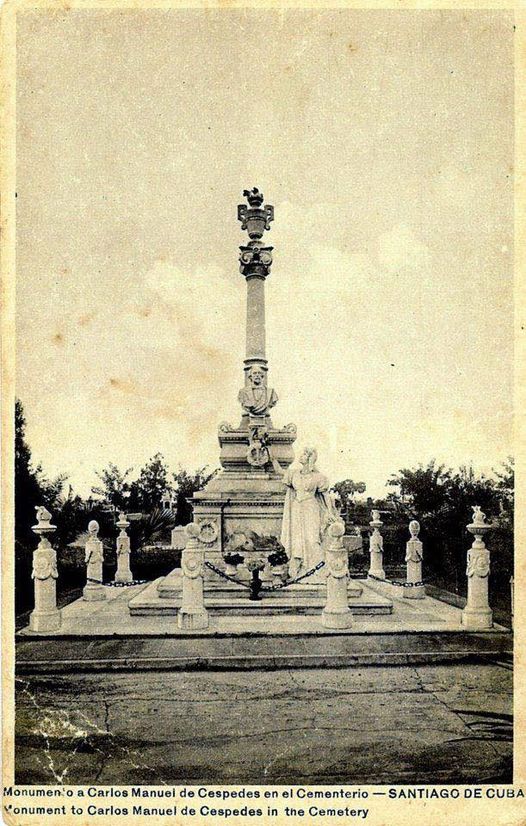 Panteón de Carlos Manuel de Céspedes. Procedente del costero poblado de Aserradero, en horas de la mañana del primero de marzo de 1874, toca muelle en la urbe santiaguera la goleta Santiago. Entre sacos de carbón, gallinas y puercos, los españoles traen como trofeo de guerra, mancillado, el cuerpo exánime del iniciador de la guerra de independencia. Tiene un orificio de bala sobre la tetilla izquierda, un ojo amoratado y el cráneo hundido, evidencias de su duelo con las tropas del Batallón de San Quintín, dos días antes, en el recóndito paraje de la Sierra Maestra. Lo tiran a la sombra de una ceiba frente al puerto. De allí lo trasladan al hospital civil La Caridad, aledaño a la Casa de… More
Coming from the coastal town of Sawmill, in the morning of March 1874, 1874, it’s docks in the urbe Santiaguera la schooner Santiago. Between coal sacks, hens and pigs, the Spanish bring as a trophy of war, sullied, the exanimous body of the initiator of the war of independence. He has a bullet hole over his left tiptoe, a amoratized eye and a sunken skull, evidence of his duel with the troops of the San Quentin Battalion, two days before, in the recondite site of the Sierra Maestra. They throw it in the shadow of a ceiba in front of the harbor. From there they transfer him to the La charidad civil hospital, surrounding the House of Intendencia, in the neighborhood El Tivol í. In underwear and laying on an ordinary pine table they exhibit the corpse. In the afternoon, in La Lola-the cart of the vulgar dead-lead the former president of the Republic in Arms to the municipal cemetery. Without sorrows or glories they buried him in a mass grave in the G yard, in the first row. Few Santiagoers witness the fact. Some of them immediately establish a kind of sworn guard to guard the site, and engineered a plan to make the remains. The two undertakers, for five years, had fidelically watched the remains. Six patriots who decided to rescue the remains of Carlos Manuel de Cespedes, in order to prevent them from being lost forever. The group heads, Calixto Acosta Nari ñoo, secret correspondent of Cespedes in Santiago de Cuba, who had seen his corpse when he was exposed at the Civil Hospital of that city. They made up Luis Yero Buduén and José Navarro Villar. There are also three people in the group. But their names unfortunately were not collected in history. Four other humble protagonists had the transcendental rescue: the wardrobe José Caridad D Díaaz, the bricklayer Prudencio Lencho Ramirez, and the undertakers José Dolores Acosta and Fernando G ómez. In March 1879, as the period for regulatory occupation of the vault is about to expire, and there is a danger that the procer’s bones may be thrown into the collective osary, the group conducts their exhumation in secret. Guided by the dim light of a bluff, Acosta and surgeon José Joaqu nn Navarro go through the cemetery with offal saved in a chest. They are buried again in a tomb purchased by Yero, and located in one of the oldest patios in the necropolis. She’s out of epitaph, so she doesn’t get discovered. On October 16, 1898, the war is over, when it is publicly revealed that Cespedes lies in the 103 pit of yard B, as a marble tombstone sent by Cuban migrants residing in Jamaica , on the initiative of Bacardi. ′′ You already have homeland «, reads on the plaque. In the Republican period, influenced by the state of abandonment presented by the niche, the East Provincial Council agrees to build a worthy grave for the Father of the Homeland. But, so narrowly, the space where it lies is unwise for that intention. Then you choose a 7,60 meter quadrant from each side, located on the left side of the central aisle, in the first yard. A privileged position in the field. As a tribute to the uprising of La Demajagua, that Cespedes led on October 1868, on that date in 1909 the first stone was placed in the cemetery to erect the new funeral monument. An Italian firm represented in Santiago by Juan Dotta wins a contest for the execution of the project. De Carrara arrive marble pieces aboard Pius XI steam in early March 1910. The work, eclectic style and magnificent decorative bill, is mounted in eight months. Structured into three sections, the sculpture set looks a bust of the hero of the 68. Behind this is a column finished by a capitel and crowned by a copon as an eternal flame. On the side, the motherland’s effigy holds a branch of laurel, a Cuban shield and broken links that allude to the first Cuban to break the chains of colonialism. Several pillars and corners complete the virtual closure of the pantheon. The remains were deposited in a cedar box with embedded silver pieces that mark his name, dates of birth and death, as well as the shields of the Republic of Cuba and the East. Inside a drawer of lead soldier are the remains of the father of the homeland. They placed two newspapers: Liberal and Independence; and the exhumation report of 1910 on the side. And holy bones wrap them in a flag. One hundred and seven years remains the Father of the Homeland at that point, where several generations of Cubans come to pay tributes. But in 2017 his rest is interrupted again, when it is decided to move him to a new location in the central heritage area; that first line that has been called Trail of the Proceres and also rest the remains of José Mart í, Mariana Grajales and Fidel Castro. Taken from On Cuba news magazine. ·

Jai alai was brought over to Cuba in 1898 by the Basques, the indigenous people

Jai alai was brought over to Cuba in 1898 by the Basques, the indigenous people of the Basque Country in Spain. On May 7,...