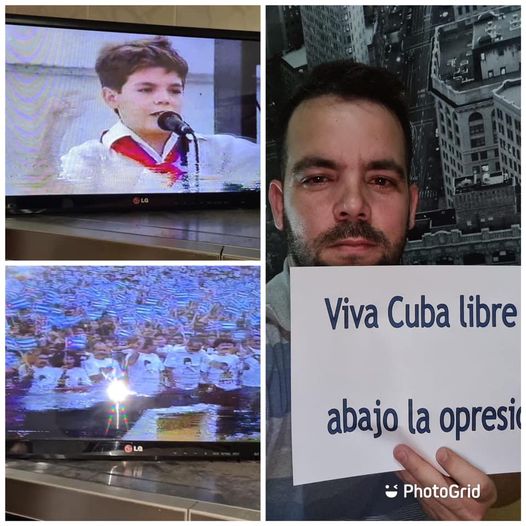 FUI UN PIONERO COMUNISTA. Fui un niño que creció gritando consignas, tuve una infancia feliz no puedo negarlo,porque mis padres me educaron con amor. Pero fui un niño adaptado a una sola idea, una sola realidad, a consignas que llevaban al mismo lugar, nunca pude debatir con un amiguito de la escuela que tuviese una idea diferente para luego llegar a casa y preguntar porque?. Crecí en el barrio alegre, carriolas de madera, guitarras de palo, el mismo barrio que hoy se consume en el pasar de los años, años que traen días cada ves más tristes. Hoy mi generación alza su voz, ya no somos niños adoctrinados,sabemos que tenemos el derecho a la libertad de expresión y a tantas libertades que nos… More
I was a child who grew up screaming slogans, I had a happy childhood I can’t deny it, because my parents raised me with love. But I was a child adapted to one idea, one reality, to slogans leading to the same place, I could never debate with a school friend who had a different idea and then come home and ask why?. I grew up in the Cheerful neighborhood, wooden carrioles, stick guitars, the same neighborhood that today is consumed in the passage of years, years that bring more sad days. Today my generation raises their voice, we are no longer indoctrinated children, we know we have the right to freedom of expression and to so many freedoms that have taken away from us, to the full dignity of man. We want a country with true equality, not the one that counts in the single press, just and equitable democracy where every citizen can peacefully express their feelings of solution ideas without being bullied or beaten by the state’s executive forces. Today my people have to buy first need items with currency they do not acquire for their work, depending absolutely on remittances, in stores designed for that and whose funds go directly to government forces, today decide the Dollars and Euros and currency of my people lose sovereignty by becoming more and more devalued because with it what can you buy? Where? Where? How much is it worth? How much do you charge this month? Depending on the currency of exile to enter that store!!!! Today I was in a market called 5 Oceans and saw a fridge full of Cuban shrimps, I’m in Europe right now how far the shrimps came to stop my people can not buy in any market for national currency, let alone grow or fish. We’re pressuring even though we know that the fate of Cuba will be decided in an office in Havana not in streets full of fire, because the government has all powers: Legislative and executive, armed forces technology, money,; All power .. But pressure is pressure both outside and inside, deep down I know the fate of my TIRED PEOPLE will decide by the powerful, toasting champagne and smoking pure. Or maybe plotting pure mafia style, and they will when many outings don’t fit them, and then #thecontendelbarrio bowling to be happy. I will continue to look at my photographs of when I was a Communist Pioneer and thinking: If my father were alive he would be equally proud to see me raise his voice boldly: today against what I thought was the absolute truth that day. LIVE COVER FREE not free in captivity, free in freedom. By Alec Mendez
Posted on Breaking Chains ·