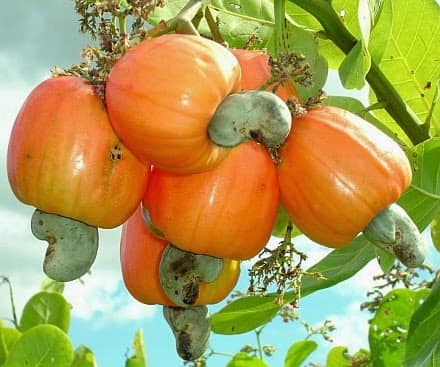 2 en 1 MARAÑÓN, aprieta la boca… Historia y Salud El marañón, Anacardium occidentale, es también conocido por los nombres de anacardo, caguil o merey. Es originario del nordeste de Brasil y del sur de Venezuela. Mantiene el apodo de “la fruta de la memoria”, porque entre todos sus beneficios está el ayudar a las funciones del cerebro. Su nombre original en portugués brasileño es caju, pronunciado “cashú”, palabra que deriva del tupí acajú. De cashú se deriva su nombre en inglés cashew. Se dice que en el año 1558 el monje y naturalista francés André Thevet hacía referencia en sus relatos e ilustraciones a las plantas y a su fruto. Los colonizadores portugueses llevaron las semillas a la… More
MARA ÑON, squeeze your mouth… History and Health The mara ñon, Anacardium Occidentale, is also known as cashew, caguil, or merey. It originates in northeast Brazil and southern Venezuela. It holds the nickname ′′ the fruit of memory «, because among all its benefits is helping the functions of the brain. Its original Brazilian Portuguese name is Caju, pronounced ′′ cashu «, a word derived from Tup í Acaju. From cashu his English name is derived in cashew. It is said that in 1558 the French monk and naturalist André Thevet referred in his stories and illustrations to plants and their fruit. Portuguese colonizers brought the seeds to India and Mozambique in 1568 and thereafter it was introduced in Southwest Asia, arriving in Africa in the second half of the 1568th century. The United States made the first seed imports from India in 1905. In the s and early st century there was an increase in cashew nut exports, becoming one of the most demanding food in the world. In Afrocuban religion, the owners are Oshun, Inle and Chang ó. Although the mara ñn is not common in Cuba to see it in our markets and does not preference at our table, thousands of compatriots travel each year to various countries where availability and habit of their consumption exists. For both them and the inhabitants of regions where this fruit is commonly consumed, go this article for greater knowledge of this nutritious food. The fruit is composed of two parts: pseud fruit and nut. The first is the result of peduncle development, in a fleshy structure characteristic of this plant. It possesses a high concentration of tannins and so it has astringent taste and acid, reasons not to be very accepted by the consumer. The actual fruit is the nut, located in the outer part of the pseudo fruit and adjacent to it. The true fruit of the cashew tree resembles a small boxing glove, a double shell deposit with a honeycomb honeycomb resin that encloses the edible part: the seed, a kidney-shaped core from about 3 to 5 centimeters, hard and dry grey. It has a high demand worldwide for its nutritional properties, plus it is used in pastries and is highly recommended in the food diet. Their toasted seeds are highly nutritious and, to say, have aphrodisiac properties. The world’s largest producer has been Brazil, its place of origin, although India now seems to have surpassed it in terms of export volume. When ripe, fruit and soft pseudofruit fall together. In commercial plantations it is more practical to separate the fruit and leave the other side on the ground for later consumption by livestock or pigs. But, when labor costs are very low, pseudofruit are collected and taken to markets or transformation centers. It has excellent medicinal and nutritional properties. All of its components have been used in different areas, from making candy and cosmetics to creating medicines to treat different diseases. With pseudo fruit are made jams, sweet preserves, jellies, jellies, merey past, merey dry, wine, vinegar, juices and consumed as fresh fruit. Although this portion of fruit has great potential, there is little scientific information about it and only 6 percent of current total production is processed. There is only warranty on the market for seeds, which are much higher demand and relatively durable. Cheers Seeds contain large amounts of vitamin C and have multiple medicinal uses. It’s rich in fiber, protein, and various fatty acids ideal for lowering cholesterol. Among some of the properties we can find vitamins B1 and B2, vitamin E, calcium and magnesium. A special feature is that fortifies memory and be excellent at diminishing some kidney disorders. For every 100 grams of pseudofruit pulp there are 45 calories and 84.4 to 88.7 percent of water. In relation to seeds and fatty acids of maragany oil, this same amount contains only 5 percent water, 18.0 a 20 g plant protein and 50 to 60 grams of unsaturated oils, predominating oleico. Mara ñon seed is loaded with antioxidants, vitamins, magnesium, phosphorus, manganese, zinc, copper and iron, plus it has no cholesterol. Monounsaturated fatty acids from seed, like oleic, are responsible for lowering ‘bad’ cholesterol levels, prevent artery obstruction and work together to reduce triglycerides and risk developing type 2. diabetes mellitus. The fiber of mara ñon seeds conducive to satiety, making it easier to maintain an ideal weight. Fiber also provides energy and accelerates metabolism, supporting a proper digestive process and preventing constipation. They are an excellent source of magnesium, very good at controlling blood pressure and avoiding muscle spasms, fatigue and migraines. It reinforces the bone structure and regulates the tone of nerves to keep them healthy. Its antioxidants remove free radicals and delay aging and its chemicals exterminate oral bacteria, preventing cavities. The seeds contain zeaxanthin, an antioxidant pigment absorbed by the retina and protects it from degeneration and ultraviolet rays of the sun. The proanthocyanidins present in the seeds of the marathon, defend us from cancer-producing cells by intervening to make it difficult to divide. · 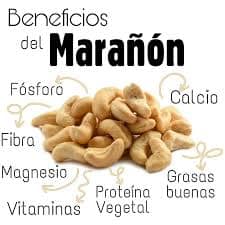 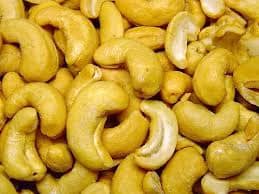 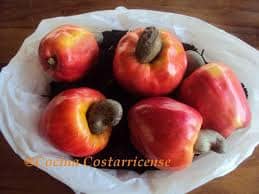 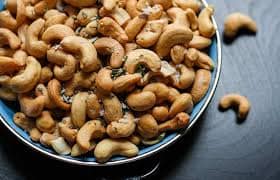