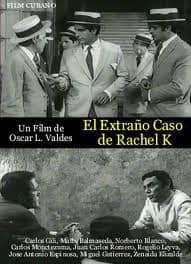 Gran escándalo en La Habana en Diciembre del 1931, asesinato de la francesita Rachel, he aquí su historia: Rachel Dekeirsgeiter,de Origen Frances , llegó a Cuba a fines de la década del siglo XX y como otras muchachas de esa nacionalidad traídas al país, en ocasiones engañadas, con el propósito de entregarlas a la prostitución, no encontró otra alternativa, que ejercer al más antiguo de los oficios , la prostitucion. En aquella época habían muchos proxenetas franceses los que dirigían el negocio en La Habana, dotada de varias zonas de tolerancia, pero se dice que Rachel, no estaba vinculada a ellos y llegó por intermedio de Oscar Villaverde, a la sazón manager del cabaret Tokio, ubicado en… More
Rachel Dekeirsgeiter, from French origin, arrived in Cuba in the late th century and like other girls of that nationality brought to the country, sometimes deceived, for the purpose of surrendering them to prostitution, found no other alternative, but to exercise Oldest of trades, prostitution. At that time there were many French pimps who ran the business in Havana, equipped with several areas of tolerance, but it is said that Rachel was not linked to them and came through Oscar Villaverde, then manager of the Tokyo cabaret, located at the well known corner of San Lazarus and Blanco. Rachel would make the night center her puteril exercise area. There the beautiful French girl had her area of influence and Villaverde was her husband, but it was speculated that she had relationship with one of the musicians of the orchestra, who lit up the northwestern work in the installation, named Alberto Jimenez Rebollar, who later became performed as a journalist.
Counted the site with a brilliant orchestra-for example, Mario Bauz á the alto sax -, where he performed, as drummer and ballad singer in English, Alberto Jimenez Rebollar, allegedly Rachel’s lover, although Villaverde appeared as French’s husband … On December 15, 1931, Habanero diaries deploy headlines announcing the perpetration of a horrible crime. In the building located on the Habaneras streets San Miguel and Friendship, next to the Astor hotel inside a bathtub, a white woman, about thirty years old appears naked and dead. The curious thing about the fact is that the door of the house, located on a third floor, had to be forced by police officers, while in the course of the investigations it could not be reached conclusions where the alleged perpetrator managed to escape, either found the weapon used in the murder. Both Villaverde and Jimenez Rebollar, accused in first instance as suspects, were acquitted, after lack of authorities responsible for the incident in question of evidence, which will involve them in the death of unhappy whore Rachel, whose body presented multiple contusions and injuries. The death certificate issued by Dr. Reynaldo Villiers, expedited at the Casa de Socorros, says the corpse was found some forty hours after the death, and records the barbaric injuries inferred to the victim. The entire police-judicial process turned into a maze, plagued by enigmas. The apartment where the girl was found was locked inside with latch, so police had to break down the door to enter the compound. And he was on a third floor, with no other way of escape for the killer. No footprints showed up that pointed out the identity of the criminal. Nor was the murder weapon found, which, according to popular rumour, was a bottle of champagne. Many claimed that the ′′ landed ′′ affair, as what happened would have been a francachella of alcohol and cocaine that ended in murder. And they added that among those involved were high figures in politics and finance. (Would there be, among those involved in the ugly affair, the American representing the Ford House in Havana, with whom Rachel also had intimate relations? ). Of course the suspicions fell on the ′′ husband «, Oscar Villaverde, and on the alleged lover, Alberto Jimenez Rebollar. But against none of them it was possible to present conclusive evidence. Musician Jimenez Rebollar-after becoming a journalist-had criminalist Carlos Manuel Palma as a defender. Palmita was famous for dealing with accusations against women, and for being able to handle cases that seemed indefensible. Simultaneously edited the magazine farandulesca show. Rachel was inhumed at the Calabazar cemetery, in the pantheon owned by Oscar Villaverde, who many years later there was to join her, to be a fellow grave who had been in life. Armando Valdesp í, born in Pinar del Rio, composed a tango, then turned into danzon, referring to the bloody fact: Was Rachel the most beautiful Frenchie,
it was a rose from the garden of illusion.
For men it was whimsical doll,
it was butterfly that flew from flower to blossom.
On a night of drinking and coconut
Folded its wings the simple butterfly,
the pretty rose of Paris withered…
Rachel, the queen of Paris.
Rachel, the admiration of the boulevard.
No longer beats your heart And I’m looking for forgetting in the champagne
under the cabaret light. There is a film dedicated to French girl Rachel, called ′′ The Strange Case Rachel K ′′(1973), directed by Oscar Valdes. ·