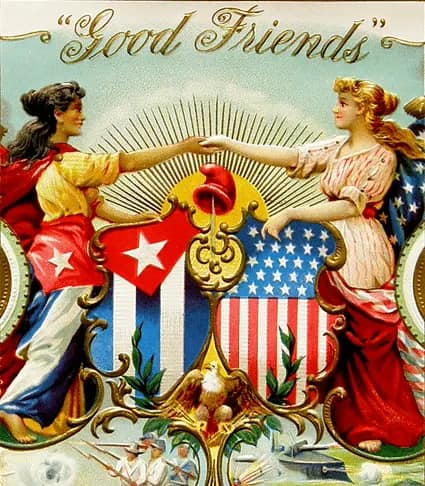 CUBA Y EEUU.
EEUU Y CUBA. Para los que se llenan de odio infundado. Aquí les va un pedazo de historia hoy bastante necesaria de leer y saber. Para que las opiniones sean sólidas y los criterios bien fundamentados.
°°°°°°°°°°°°°°°°°°°°°°°°°°°°°°°°°°°°°°°°°°°°°°°°°°°°°°°° …..El pueblo de Cuba tiene una larga historia de respeto y apoyo a los Estados Unidos. El orgullo nacional de una Cuba libre vive en todos los cubanos vivos que aman la libertad. Muchos cubanos lucharon valientemente en suelo estadounidense en la Guerra de Independencia.
Los cubanos, como pueblo, ayudaron a recaudar fondos muy necesarios para el Ejército Revolucionario de George Washington. Las «Damas de La Habana», un… More
For those filled with unfounded hate. Here’s a much needed piece of history today to read and know. So that opinions are sound and criteria are well founded.
°°°°°°°°°°°°°°°°°°°°°°°°°°°°°°°°°°°°°°°°°°°°°°°°°°°°°°°° ….. The people of Cuba have a long history of respect and support for the United States. The national pride of a free Cuba lives in all living Cubans who love freedom. Many Cubans fought bravely on American soil in the War of Independence.
Cubans, as a people, helped raise much needed funds for George Washington’s Revolutionary Army. The ′′ Ladies of Havana «, a group of Cuban mothers, heard General Washington’s request for desperately needed funds and raised an amazing amount at that time. They sent Virginia the equivalent in today’s money of $ 28 million. This has received little exposure in American history books, but it is well documented. The inscription the ′′ Ladies of Havana ′′ wrote about their contribution was:
′′ So the children of American mothers are not born as slaves «… … The commitment of the Havana Ladies was very little known, except for American historian Stephen Bonsal, who wrote: ′′ That amount raised [by the Ladies of Havana] should be regarded as the ground where American independence was erected «. General Jean Baptiste de Rochambeau wrote in his ′′ Daily Memories «, available at the Library of Congress: ′′ The joy was enormous when received, Havana’s money: the contribution of 800,000 pounds of silver that helped stop the financial bankruptcy (the Revolutionary Army) and lifted the moral spirit of the Army that had begun to dissolve «… … Stephen Bonsal, wrote, ′′ Cuban women’s contribution through their jewelry could very well be the foundation on which it is founded, America’s freedom «… … General George Washington had a dream of freeing the colonies of the English. He also had a band of mercenaries to pay, as he relied on such soldiers to wage the war he deemed fair and necessary.
The French were here in the colonies helping, and given that there was no money to fund mercenaries or war, Lafayette ordered the frigate known as ′′ L ‘ Aigrrette «, to travel first to Cadiz, Spain, to see if the money could be earned In vain, the Spanish in Cadiz were very kind, but not financial. Then the ship headed to Saint Domingue, what is now Haiti, and what was then the wealth of all colonies, given the enormous wealth that was held in the sugar industry. The French there told the French on the ship, ′′ Nous n ‘avons pas d’ argent «, in other words, there would be no money from Saint Domingue sent to Washington. L ‘ Aigrette then set sail to the Port of Havana for water and supplies to return to Virginia.
It was there that the word spread, that Washington needed funds to organize a battle that was at the time alone at the planning stage. Women, girls, from Havana to Matanzas, to Pinar del Rio, freely gave their jewels, the French even documented that they got rid of their diamonds, to help Washington in their quest for freedom and funding of their mercenaries… … The women of Cuba emerged, knowing that this was a just cause, who renounced their only wealth, which was their gold, to help the love of another nation’s independence.
When L ‘ Agraitte set sail and arrived in September 1781 in Virginia, General Washington, learning that there was enough funding of over 1,200,000 pounds of gold, silver and Cuban diamonds, historians say he lost his habitual composure and he threw his hat. in the air of pure joy.
Cuban women’s contribution to the cause of American independence made possible the funding of the decisive battle of American independence, known then as October 31, 1781, which England’s General Cornwallis had delivered to their general to the Washington man, as a sign of English surrender to a band of dreamers known as the Founding Fathers of the United States of America.
′′ May God bless the children of these Cuban women who loved their own freedom, but knew that the cause of freedom and justice should be persecuted at all costs anywhere in the world where that state of affairs is needed «… … When New York rejoices this Fourth of July, I too will rejoice doubly, because they were our Cuban ancestors, and despite all the disdain for this earth, which made the liberty and generosity of so many possible. And by writing this, I hope to start awakening the minds of people that Cubans still today as in 1781 keep their unique tradition of defending freedom above all else…. °°°°°°°°°°°°°°°°°°°°°°°°°°°°°°°°°°°°°°°°°°°°°°°°°°°°°°°° Taken from: https://cubanisms.wordpress.com/2012/07/04/thanks-to-cuban-women-1781-the-washington-times-72000%E2%80%8F/ Post by Arianne GP ·

#SOSCuba FREEDOM! DOWN WITH THE DICTATORSHIP! Those are the chants we’re hear