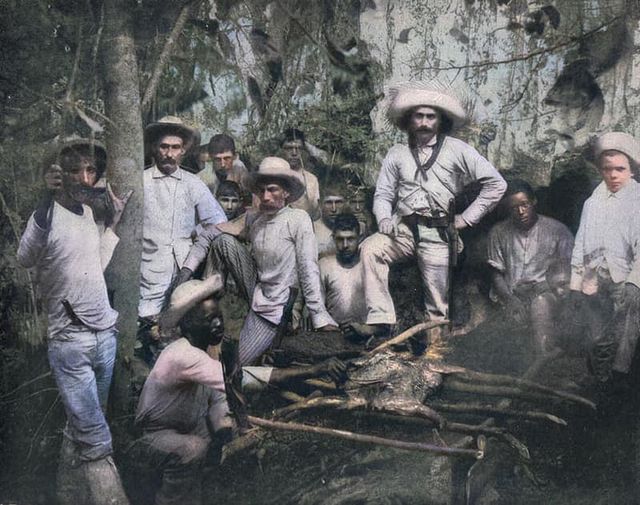 ¿Qué comían nuestros mambises en la Guerra de los Diez Años.?
Todo el mundo conoce las dificultades materiales por las que atravesaron los mambises en nuestras guerras de independencia, tanto en armas como en alimentos y otros enseres. Sin embargo, la inteligencia natural del cubano y la perspicacia de nuestros patriotas durante las guerras de independencia permitieron a nuestras tropas sobrevivir en la manigua y vencer al enemigo en numerosos combates. La batalla por la supervivencia y el triunfo fue grande, pero aún peor si la contienda duró nada menos que diez años y las condiciones económicas no eran favorables a nuestros antepasados combatientes. Pero es conocida la frase, que no por… More
However, the Cuban’s natural intelligence and the insight of our patriots during the independence wars allowed our troops to survive on the manigua and defeat the enemy in numerous fights. The battle for survival and triumph was great, but even worse if the contention lasted as ten years and economic conditions were not favorable to our combatant ancestors. But the phrase is known, which is not old enough to be true, that there is nothing harder than a Cuban, and if something does not kill us, it strengthens us more and more. SCASES ABUCTIONS Getting the right supplies was very complicated and difficult, mainly because of the lack of beef in combat zones. Therefore, our soldiers were forced to eat majas, majas or sacrifice their own horses. Cooking food was also a complicated affair. On one occasion the mambises of a camp in Las Villas used four bells as pots. Bread, cookie, sugar, coffee and salt became extremely rare foods. When the honeycombs were scarce, they obtained honey from the fruit of the guasima, although what was obtained was not abundant. The shortage of food in the manigua forced to replace ingredients and create recipes, taking advantage of the natural riches of the mountain and the experience of its villagers. GOOD SUBSTITUTES In the absence of salt they used cana palm ash, while to sweeten used honey, and as coffee boiled banana, sweet potato peel and even palmiche Due to lack of supplies, troops consumed wild plants. The raw palmito was prepared in salad; boiled was very liked by all and made up much of its feed. Even the seeds of assholes and tamarind were used as thick as soups; against exhaustion and extreme tiredness they drank hot water turned into spicy water thanks to the chili guaguao and after drinking it they continued with marches and fights. The tasty sweet potato was one of our saving viandas, just like the potato in Europe for the Napoleonic troops. Inherited dishes from Taina kitchen were made using cassava as a basic component; the menu was the casabe, the naiboa, the yare and the catibia, the latter bitter palate. From there comes the popular phrase ′′ stop eating catibia ′′ to abandon the bad or the wrong phrase being done. Cuban soldiers were able to adapt to any circumstance because ′′ hungry no hard bread «. IN BAYAMO After being burned Bayamo, in January 1869, was turned into a cradle of Creole Kitchen. And the verses of Carlos Manuel de Cespedes, the Father of the Homeland, are already part of our history when he declaimed his famous verse: For the Cuban is a mancilla
and lack of intelligence
toast independence with chamomile wine. Chamomile of Castile,
Castile Land of Spain,
who subjugates us and pawns
with complacent evil.
I toast to freedom with cane spirits «. Source: Cuba now ·