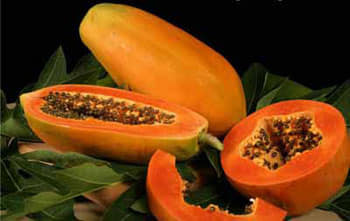 De CUBA… SUS FRUTAS. FRUTABOMBA. ¡Que rico.. en almibar y queso blanco! Es una especie originaria de Mesoamérica. En México se distribuye por el Golfo desde Tamaulipas hasta la Península de Yucatán, por el Pacífico se le encuentra desde Baja California a Chiapas.
Es conocido desde muy antiguo que las plantas, al igual que cualquier otro ser vivo, no se distribuyen uniformemente en la superficie terrestre y que cada una de ellas ocupa unos territorios determinados. Carica papaya es una planta de origen centroamericano, conocida y empleada en casi toda América desde hace varios siglos, aunque hoy día se cultiva en muchos países de otros continentes, principalmente, en Asia y África. Antes… More
FRUITABOMB. Yummy.. in mushroom and white cheese.. It’s a species native to Mesoamerica. In Mexico it is distributed through the Gulf from Tamaulipas to the Yucatan Peninsula, the Pacific is found from Baja California to Chiapas.
It is known very ancient that plants, like any other living thing, are not distributed uniformly on the earth’s surface and each of them occupies specific territories. Carica papaya is a plant of Central American origin, known and used in almost all of America for several centuries, although today it is cultivated in many countries of other continents, mainly in Asia and Africa. Before the arrival of Europeans, Mexico was given the name chichihualtzapotl, which in Nahuatl means ′′ mother zapote «, and was a fruit especially related to fertility.
Originating in the forests of Mexico, Central America and North South America, the papaya plant is now grown in most countries of the intertropical zone of the orb, the first producing countries: India, Brazil, Indonesia , Nigeria and Mexico (FAO data, 2013).
Fruit bomb, also known as milky or papaya, is a fruit that enjoys more medicinal properties; why it was baptized as ′′ the fruit of angels ′′ by Christopher Columbus himself. The shape of this fruit is spherical, similar to the shape of a pear with a measure that can reach 50 centimetres long, but which on average is about 17 centimetres long and weigh approximately one pound. The color of the pulp is a very live orange, highlighting certain shades of yellow or pink with abundant small seeds, black-colored and rounded form that are wrapped in a slightly gelatinous substance. Properties of the Fruit:
The properties presented by papaya or Olocoton fruit for human health are: Fight constipation as it acts like a soft laxative. It accelerates external and internal scarring (example gastric ulcers) Papaya eases tan by containing large numbers of Retininin eases Melanin action) Eliminates intestinal parasites. It also helps to remove Amebas that are responsible for many chronic diarrhea as their fresh seeds are very rich in a nutrient called Carpasemina. It reinforces immunity thanks to its high content in Vitamin C. Papaya eases digestion and calms pain and inflammation of the stomach thanks to it containing an enzyme called Papain. The Papain is an enzyme similar to human pepsin that degrades proteins and favors the digestive process. That’s why people feel it helps them digest heavy meats and meals. Papain also has pain pain medication properties or pain pain pain pain pain pain. Very useful in case of gastroenteritis, colitis and irritable colon thanks to its softening and antiseptic effect on the intestines. Papaya juice can remove skin spots and improve eczema. Papaya is the ideal fruit for dieting as it is low-calorie and nutrient rich. Alkaline effect of the body (ideal for people with acidosis)
Among the multiple fruit bomb has, it is a food rich in sugars, fiber, vitamins B, C and A, in the form of carotenes, and rich in minerals. Vitamin C and carotenes are two excellent antioxidants that help remove existing free radicals inside and outside the body. By consuming a 140 gram cup of fruit bomb, the body would be receiving 86,5 milligrams of vitamin C, which is equivalent to the recommended dose by specialists; as well as benefiting from good proportions of Bond, B2 and B 3 vitamins, and minerals such as iron, sulfur, calcium, magnesium, phosphorus, potassium, sodium and silicon. Likewise, this fruit is rich in papain, an enzyme that favors digestion, helping to disregard food-ingested proteins, preventing gastritis and gas formation. This delicious fruit also contains papain, an enzyme with properties similar to two other of the body. One of them is part of gastric juices and one of the pancreatic juices. Within the food industry, the potain present in the fruit bomb is used to treat meat and make it easier for chewing; and in gastronomy
Cubana is used to prepare one of the island’s most delicious and popular desserts. Benefits of Fruit Bomb: – Favourishes weight loss: This fruit is excellent to help reduce body weight as it is low in calories, containing just 53 per 100 grams of fruit.
– Helps nervous system regulation and digestive device. – Help strengthen heart muscle. – Protect skin and hair. – Prevents constipation and acts as a slight laxative. – Favour the healing of gastric ulcers. – Boosts the immune system and helps gut parasite purification. – Delays Aging. – Prevents fluid retention in the body. · 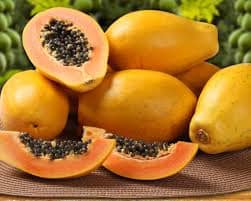 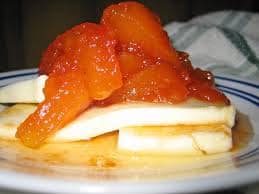 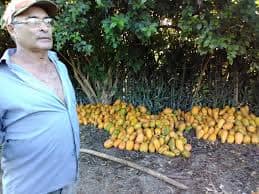 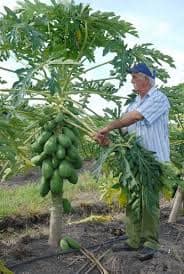